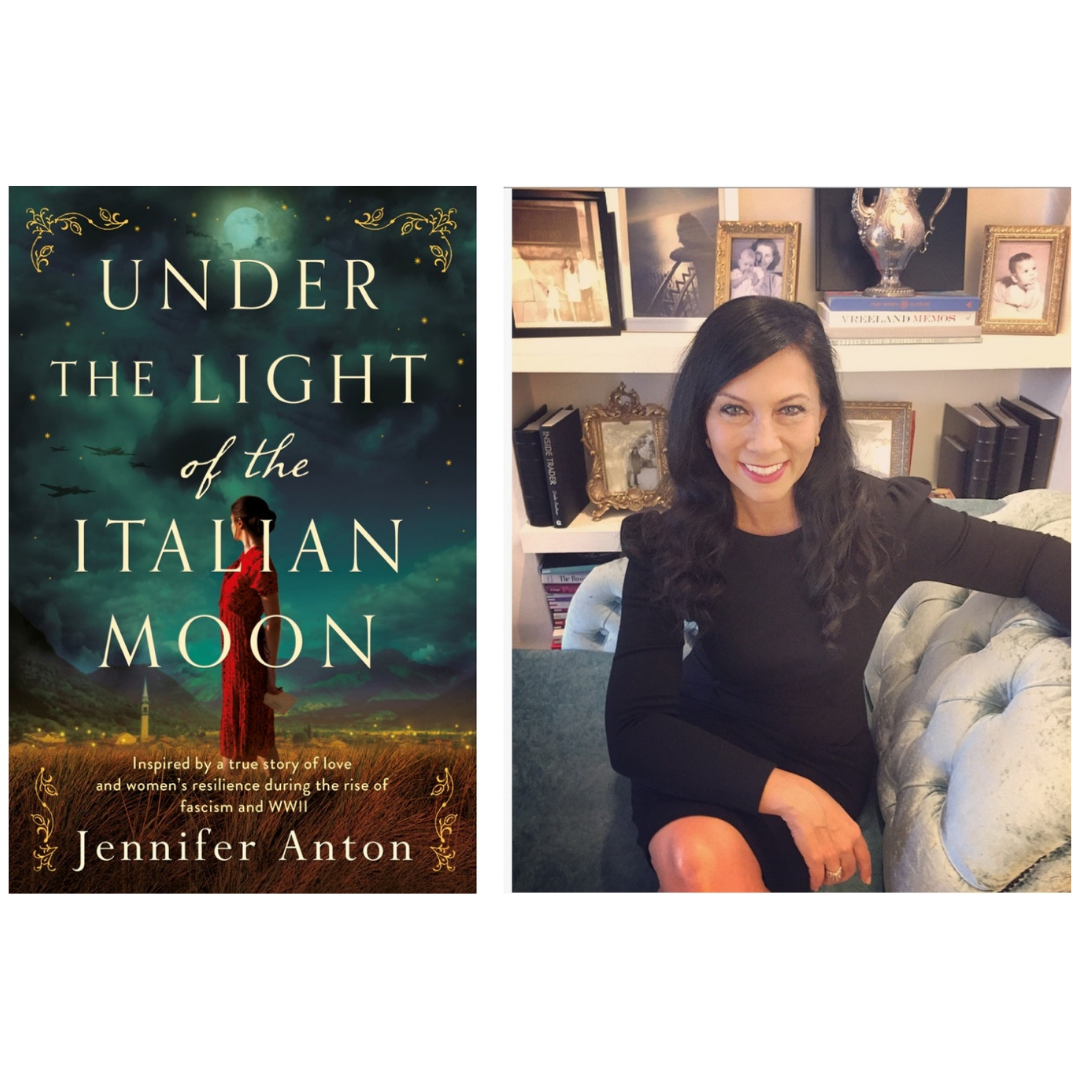 I had the pleasure of speaking with Jennifer Anton, author of Under the Light of the Italian Moon, a biographical fiction set in rural Italy during the Mussolini Fascist Era.  The book will debut March 8, 2021 in honor of International Women’s Day. Apart from my interest in the book, I was intrigued by the fact that Jennifer once lived in Milan. We met for a virtual coffee and she told me about the making of the book, her research and her experience collecting the precious stories and anecdotes that would come to life in the characters and plot of the novel.

Under the Light of the Italian Moon is not only a romance about two young lovers who cannot be together in a trying time of war, but it is an intimate look into the lives of women, their role in society and the silent struggles they lived through during the most historically oppressive time in modern day Italy.

Inspired by a true story of love and women’s resilience during the rise of fascism and WWII, Under the Light of the Italian Moon is set in Fonzaso, Italy, telling the story of Nina Argenta, the daughter of the town’s strong-willed midwife. Nina seeks to define her own destiny but when her brother emigrates to America, she promises her mother to never leave. When she falls in love with childhood friend, Pietro Pante, during his brief visit from America, she must find a way to be with the man she loves.

Pietro and Nina begin a long-distance relationship that continues as Mussolini forces political tensions to rise and his fascists throw the country into chaos. When Hitler’s Nazis occupy and terrorize their town, Nina struggles to survive and her dreams of a life with Pietro are threatened by an enemy she must face alone.

The story is inspired by the women of her family. Jennifer Anton holds dual citizenship, American/Italian and now lives between London and Lake Como, Italy.  In 2012, she and her husband gave up their jobs, sold their house in Chicago and moved to Milan with their toddler. Not only in search of her roots, she had also already started writing the novel and living in Italy would provide invaluable resources and personal experiences. The novel was inspired by the many stories told by her own grandmother as well as from family research she was able to complete while in Italy.

Promote your business in Easy Milano

Photos, memorabilia, and stories from family and friends helped shape
Under the Light of the Italian Moon

Jennifer’s research brought her to two rural towns at the foot of the Dolomites, Feltre and Fonzaso, in the province of Belluno.

“Most people expect to go to city hall or the library to find all the old records digitally scanned,” she explains, “but in Italy, old records are found at the local church. They are often old dusty books with faded handwritten documents. They are absolutely fascinating!”

In addition to documents and book research, she found a treasure trove of real-life experiences by speaking with the people who lived during the fascist regime.  She continues, “A lot of questions I had for my grandmother remained unanswered as she passed away before I could ask them all. I went back to Italy to learn about my family and life during that time from the people who lived through it. There’s so much in the book that came from the first-hand accounts that gave me true insights into daily life and the emotions they felt. It was a real gift to speak to the elderly people of Fonzaso some of whom were in their 70s, 80s or even 90s. They shared such beautiful stories, beautiful little things that I tried to capture and incorporate into the story. Although I am pleased and extremely proud of the outcome of the book, collecting the stories was a fulfilling experience in itself.”

Of course, her own experience of living in Italy was different from her ancestors, but she felt at ease and knew it was the right choice. Milan was the city of choice as it was international and metropolitan and a good base only a few hours drive from Lake Como and Fonzaso.

Jennifer Anton and her family

“Living in Milan was a wonderful experience. I miss the museums, the parks and the people. The people of Milan are so stylish, they just have a presence and effortlessly look chic.”

Jennifer also shared some of her favorite places and tips about Milan with me.

“My favorite museums are Museo del Novecento, Fondazione Prada and MUDEC – I saw an incredible Klimt exhibition there, it was sensory overload -in the best way! My daughter’s favorite place was driving the mini electric go carts for kids at Parco Sempione. We first lived in the Corso Buenos Aires neighborhood, then De Angeli, they were both great areas to live in. My ‘secret place’ is a hair salon just north of De Angeli metro station where all the fashion week models get their blowouts. It’s dirt cheap, not fancy but fast! I always pop in when I’m in Milan to look my best and put on my bella figura! Finally, I love antiquing in Brera and of course, exploring Lake Como.”

As an expat in Italy, Jennifer and her husband made an effort to raise their daughter as a citizen of the world. She explains, “We both found jobs and our daughter went to an international school. Our daughter had already attended an internationalelementary school in Chicago and spoke French, so learning Italian wasn’t difficult for her. The school offered a firsthand experience of many cultures and languages. As an expat, I think it is important to be accepting of differences. Of course, we had expat friends, but we also had many Italian and international friends. Living in Italy, I learned to be flexible and accept things for how they are. For instance, when all the bank machines go out in an entire town, you just have to ‘let go’.  Nothing in a foreign country is going to be exactly what you are accustomed to. It’s important to try to integrate. Just because you are an expat it doesn’t mean you are worldly.”

Although Jennifer was born and grew up in Joliet, Illinois she says she feels very Italian. “Feeling Italian is about having a connection. When my ancestors emigrated, they didn’t really want to leave. They did everything to keep ties and traditions alive. That connection gets passed down.”

Curiosity about her family history began in high school when she was studying WWII. She had asked her grandmother about it, and found it interesting, but like many teenagers she then moved on to other interests.

It wasn’t until a life changing event that she felt the need to dig deeper into her family history, in particular the life and experiences of her grandmother and great grandmother.

Jennifer suffered a life-threatening post-partum cardiomyopathy, and soon after, her Italian grandmother died leaving her questions unanswered. This was the beginning of a 14-year journey seeking to capture the stories of her female Italian ancestors and develop them into a historical/biographical fiction novel.

Becoming a mother enforced her relationships with the other women of her family. She found strength in the story of her great, great grandmother who had been a midwife during the Fascist era. “At the time, women couldn’t vote, women were demoted and had to pay higher fees for education.  A motherhood award was given to women who gave birth to many children; it was a general belief that a woman’s job was to have children for the patria. Midwives couldn’t educate women on preventing pregnancy via natural methods or otherwise.It was illegal at the time to speak of any type of birth control, even if it was in the best interest and safety of the woman. I found out that my great great grandmother had had a negligence claim issued against her which broke her heart and led to her premature death. Men could use these laws to take revenge on women.”

A proud advocate for women’s rights and equality, Jennifer Anton hopes to rescue women’s stories from history, starting with her Italian family.

“My grandmother always wanted to return to see Italy again. She wasn’t able to, but I went back for her and her memory lives on through me.”

Under the Light of the Italian Moon by Jennifer Anton

Under the Light of the Italian Moon will debut March 8, 2021 in honor of International Women’s Day.

You can order the novel on Amazon here: getbook.at/JAnton

“A TRIBUTE TO WOMEN, MOTHERS, AND DAUGHTERS”

Here’s what they are saying about Under the Light of the Italian Moon:

‘A story that will embrace and enlighten both women with Italian backgrounds and those who want to know more about the evolution of Italian women both at home and abroad.’ – Midwest Book Review

‘A must-read for Italian-Americans with pride in their culture and the sacrifices our families  made to bring us to America… A moving historical fiction piece that feels like a  conspiratorial chat over coffee with your nonna.’ – Goodreads Reviewer

‘Anton’s masterful and touching tribute to the women of her family is not only an  important addition to the literature of the lived experiences of the wars, but also to that of  strong, brave women triumphant in great adversity.’